My Books. My Blog. My Post. Daryl devore's medieval fantasy romance - The Last Dragon and how this book came to be written. #fantasy #medieval #romance 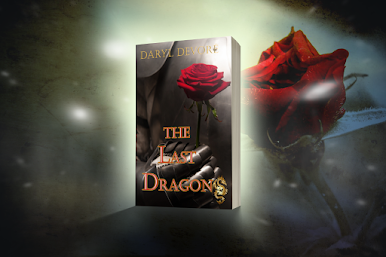 How did I end up writing The Last Dragon?

A long time ago – and I mean a looong time ago – I wrote a medieval romance. My publisher – at the time – said he kept expecting a dragon to show up at some point in the story.

I’d never written a medieval romance and definitely not a fantasy, but that comment rattled around in the back of my head for a few years.

One day, the concept decided it was time and pushed forward. I started the story, but wasn’t happy where it was going. Why?

I’m a happy person – I didn’t like having to get my head into the dark place to write the new story. So, the book sat – for years. In 2016, I started dabbling with it again. I have a long-time friend and cp who I can bounce ideas off. We went around in circles while I tried to sort out what I wanted to write.

Then one day, for some reason, it all came together. I am a panster and have no idea where my story is going. I get an idea – gee what if ???? were to happen? And then I write it to make it happen.

I began to have a lot of fun writing the story.

My beta reader suggested splitting the book into three and making an epic trilogy. My ego got in the way – Hello Game of Thrones!! – and I pondered and tried to work out that concept and after several months, I conceded – I loved my story the way it is.

But, I will let you in on a little secret – an off-shoot story has suddenly pushed its way to the forefront and I am now writing my second medieval fantasy romance.

Scene set – while on a mission to save a newborn from a crazed mob, Derry and Prince Hawkyns rest in a nunnery.

Derry glanced down at her skirt, dirty from the past few day’s exertions. “I fear to ask.”

“Baswich Abbey is no more. It has been burned to the ground.”

Hawkyns shook his head. “A dragon. He flew in breathing hellfire. The village—” He closed his eyes and heaved a dejected sigh. “Pariset’s father told me to take his son. Protect him. The horse struggled with all of us. He jumped off. I searched for him, but had to give up to get his mother here.”

He slammed his hand on the table. His mug of ale shook.

A soft cough sounded behind them. The Mother Superior stood with her hands folded. “I fear ye may not stay. We have no rooms for a man.”

“But—” Derry was silenced by the gentle pressure of Hawkyns’ hand on hers.

“I can sleep rough. 'Tis early autumn, but the evenings are still warm. A blanket would be most appreciated.”

The nun bowed her head and exited.

“The sisters leave the world as we know it. Men are not part. I will find a quiet place and bed down. My bones are so weary I could lay on a pile of rocks and snore so loud I’d make the forest tremble.” He finished his stew and showed her the empty dish. “In the morning, I will search for Pariset. I will find him and return him to his mother.”

He did not need to wait until morning. A loud smash against the nunnery’s thick, wooden front door and a yell, we have the boy, signalled where Pariset was. “Give us the babe and we will not hurt the boy or the sisters.”

Hawkyns gulped the last of his ale and stood. Derry wanted to yell for him not to go, but she knew that was selfish and wrong. He was a knight. A protector. He had to go. Even though deep in her heart she knew this was the man she could love and that letting him walk into the mob meant his certain death, she said nothing as he walked away.

Her lips held back words while her heart screamed with fear.

Blurb and Buy Links What do dragons, knights and romance have in common? Grab a copy of multi-published author Daryl Devore’s medieval fantasy romance – The Last Dragon and discover the answer.