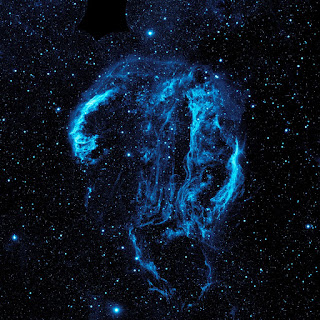 Wispy tendrils of hot dust and gas glow brightly in this ultraviolet image of the Cygnus Loop nebula, taken by NASA Galaxy Evolution Explorer. The nebula lies about 1,500 light-years away. 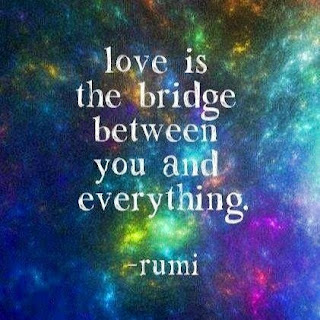 What an awesome thought.
I love flowers.
I love animals.
I love my family and friends.
And if I and 7, 426, 216, 758 other people on this planet all loved each other then maybe the stupidity of war and hate and senseless murders would stop. Just a thought.


What's happening in August on Romance - Sweet to Heat
31 - Fridays in Space
Posted by Daryl Devoré at Thursday, August 30, 2018 No comments:

The Orion Nebula - a mere 1,450 light years away. #space #fridaysinspace 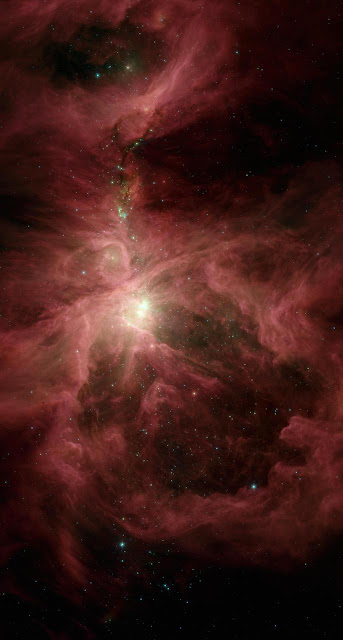 This image from NASA Spitzer Space Telescope shows the Orion nebula, our closest massive star-making factory, 1,450 light-years from Earth. The nebula is close enough to appear to the naked eye as a fuzzy star in the sword of the constellation.

Each of us must feel love in our hearts so we can be at peace and fill the world with good. #yoga #thought 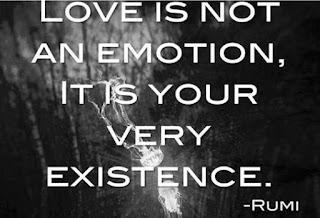 I was created out of love.
Some children must live the horror that they were created out of violence (rape).
But even those damaged children can let love flow through their veins.
Each of us must feel love in our hearts so we can be at peace and fill the world with good.
Just putting that out there.

Meredith Bond’s Merry Men Quartet recounts the stories of four friends - each with an intriguing past, trying to find their way – and discovering romance – among the salons and secrets of Regency England. #regency #romance 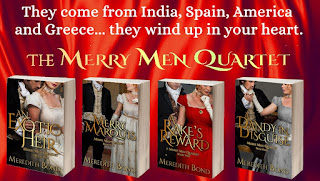 The Merry Men Quartet recounts the stories of four friends and their paramours, each with an intriguing past, trying to find their way – and discovering romance – among the salons and secrets of Regency England.

The series begins in alluring India (in An Exotic Heir), through the eyes of Cassandra Renwick, who has escaped to her parents in Calcutta to get away from society. But Calcutta provides her with another challenge – the intensely handsome Anglo-Indian Julian Ritchie, who is intent at redressing the snubs and slights he has had to endure. Julian determines to get his revenge by making his boss's newly arrived daughter fall in love with him. What he doesn't realize is that love – and revenge—can go both ways.

Julian and Cassandra’s story moves from the colorful palaces of India to the cultured drawing rooms of Regency London and intertwines with the stories of three Regency gentlemen, and their adventures (romantic and otherwise). Lord Merrick (Merry to his close friends) and his close friends Sinclair Stratton, Lord Reath (known as Sin), and St. John Fotheringay-Phipps (known to all simply as Fungy), are there to help Julian and be helped—each to his own intriguing match.

The challenge for the dashing Sin (in A Rake’s Reward) is the outspoken and very determined American Sarah Whately, who will do anything to find a treasure her grandfather said was hidden in their family estate that Sin won at cards when he was young. The kind nobleman Merry (in The Merry Marquis) must help the shy but incredibly talented Spanish pianist, Teresa Seton, find her way in society while overcoming the tragedies of his own past. And the foppish, funny Fungy (in A Dandy in Disguise) has to repeatedly rescue the spirited and naïve Rose Grace, who is just learning the ropes of society after spending her youth on an archeological site in Greece.

Each of the stories, a complete tale by itself, blends romance, adventure and intrigue – and a dash of fun – with outsiders to Regency society trying to adjust to its manners and mores. Read the Merry Men Quartet: An Exotic Heir, A Rake’s Reward, The Merry Marquis and A Dandy in Disguise.

AND - There is a contest - one lucky person will win....Click here to enter contest

What's happening in August on Romance - Sweet to Heat