My Books. My Blog. My Post. A HOT excerpt from my soon to be released - Capturing His Heart. 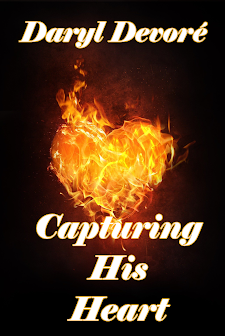 Capturing His Heart is a duet - a 2 book bundle. The first book is Dark Chocolate and Strawberries. This is the opening scene.

“Oh, that feels so good.” She ran her fingers through his hair.

He reached his hands up to her shoulders and trickled his fingertips to her hips. His strong fingers kneaded her breasts. Her erect, pink nipples rubbed against his rough hands each butt cheek and dug his fingers into her flesh.

She slid her fingers along his chest and flicked his nipples. “You make me feel so hot.”

Applying tender kisses on her stomach, he moved from her navel to her thigh. He pressed a hand on each inner thigh, urging her to spread her legs. A thrill tingled in her as he licked his lips.

A smile crossed his face as he lowered his head between her legs. Using small nips and kisses, he traced a path along her thigh and stopped when his lips brushed the edge of her bush. Licking her slit, he caressed the inside of her thigh with the tips of his fingers. When his hand reached her pussy, his finger teased her wetness.

“Don't stop!” She entangled her fingers in his hair.

His finger slid deep into her as his tongue neared her clit. “Baby, I'm gonna fuck you until you beg for…”

“Oh gawd,” moaned Red, as she grabbed a pillow to cover her ears. “It can't be morning.”

From under the pillow, she forced one eye to open. The digital alarm clock showed 6:07.

…snow and blowing snow and near record cold temperatures…

“I don't wanna get up.” Her left hand reached out from under the warm blankets and slapped at the snooze button. Closing her eyes, she sighed and settled back into sleep. “Can I just go back to my dream?”

…all roads leading into the downtown core are slow and there are two major accidents on Michigan Avenue. Delays and cancellations at O'Hare International….

Again, her left hand thrust out from under the blankets and pressed the snooze button. No sooner had she settled back under the covers, the annoying beep-beep-beep of the backup clock sounded.

Red sighed and threw back the covers. A blast of cool air chilled her arms. There was only one way to shut off this alarm – get out of bed, walk across the room and smack the damn button.

Next Thursday - Feb 25 - a hot snippet from the 2nd book in this duet - Branwyns Love.

Blurb for Capturing His Heart

Daryl Devoré has bundled two of her hot romances into a duet. A hot twisted fairy and a hotter medieval romance combined in Capturing His Heart.

On board, she meets Andrew Woodsman and Willem Olf. One a cutie with the biggest puppy eyes and the other - dark and sophisticated. Even with her grandmother's words ringing in Red's ears - "Never trust a wolf in sheep's clothing" - Red has trouble choosing which man is the big bad wolf and which is her happily ever after.