White dwarfs are the burned-out relics of stars that rapidly lose mass, cool down and shut off their nuclear furnaces. #FridaysinSPace #Hubble 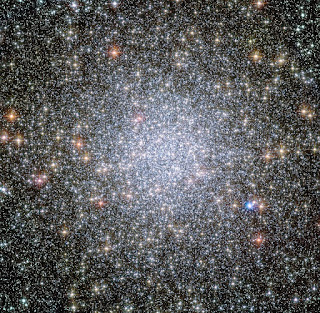 Using NASA’s Hubble Space Telescope, astronomers have captured for the first time snapshots of fledging white dwarf stars beginning their slow-paced, 40-million-year migration from the crowded center of an ancient star cluster to the less populated suburbs. White dwarfs are the burned-out relics of stars that rapidly lose mass, cool down and shut off their nuclear furnaces. As these glowing carcasses age and shed weight, their orbits begin to expand outward from the star cluster’s packed downtown. This migration is caused by a gravitational tussle among stars inside the cluster. Globular star clusters sort out stars according to their mass, governed by a gravitational billiard ball game where lower mass stars rob momentum from more massive stars. The result is that heavier stars slow down and sink to the cluster's core, while lighter stars pick up speed and move across the cluster to the edge. This process is known as "mass segregation." Until these Hubble observations, astronomers had never definitively seen the dynamical conveyor belt in action. Astronomers used Hubble to watch the white-dwarf exodus in the globular star cluster 47 Tucanae, a dense swarm of hundreds of thousands of stars in our Milky Way galaxy. The cluster resides 16,700 light-years away in the southern constellation Tucana. Credits: NASA, ESA, and H. Richer and J. Heyl (University of British Columbia, Vancouver, Canada); acknowledgement: J. Mack (STScI) and G. Piotto (University of Padova, Italy)