This was supposed to be the start of my vacation. Not the end of my life. Daryl Devore's What happened in Bangkok on Book Hooks #MFRWhooks #MFRWAuthor #hotread

Today, I am showcasing a snippet from Book 1 of my Rock Star Trilogy – What Happened in Bangkok.

Scene Set – Darien was partying at a club when a Triad did a hit on it. He’s the only one who got out alive.

Footsteps from above reminded him of his mission. Get out. Alive. Now!

He stood, turned, slipped in the puddle of blood again, steadied himself and exited the small office. Ahead, above the door, was a broken Exit sign. He glanced around. No one. No one―alive. Placing his hand on the door, he pushed it open, then stepped outside. As it clicked shut behind him, he pumped his fist in the air. He'd made it. He was safe.

The cool night air washed over him. He inhaled the air of freedom, then gagged. The putrid odour from the dumpster next to the door ripped the breath from his lungs. Stumbling forward, he gasped as he trudged through the dark alley. He tripped over trash and a drunk's extended foot. The grungy man swore and threw an empty bottle at him. It missed, shattering on the pavement.

Darien's eyes watered. The smell repulsed him. He couldn’t escape it, no matter how fast he moved. He glanced down. His hands, shirt and khakis were covered with every vile thing he'd just escaped from. His knees buckled. Spasms racked him. He tried to throw up anything else that remained in his stomach. But nothing came up.

He rested on his hands, waiting until the spinning in his head slowed. He stood and lurched forward. Stepping out of the dimness of the alley into the neon-glare of the main street, he glanced right and left. A chic couple frowned, stepping around him, with their noses wrinkled in disgust. The woman’s stiletto heels tapped a fast rhythm as they hurried away. He moved to the edge of the sidewalk and flagged a cab. When it slowed, he reached for the handle. As he bent to slide in, the cabbie yelled something and sped off. Darien lost his balance and smashed onto the pavement. His head bounced. Stars flashed before his eyes.

The blast of a car horn and the screech of tires made him snap his eyes open. He crawled back to the sidewalk and sat, leaning on a lamppost.

The stupidity of the scene welled up in him. He wasn't sure whether to laugh or what. It was Songkran, the traditional Thai New Year festival. Brilliant yellow, green, and red banners and lanterns decorated the brightly lit streets of Bangkok. People danced and laughed as they walked along the sidewalks. Darien turned his head and shivered. There, fifty feet away, hidden in a private club, was abject death and terror. And what the hell was he doing in the middle of it?

He braced his feet against the sidewalk and pushed, shimmying his back up the streetlight pole. His cell phone pressed into his back hip. He ripped it out of his pocket, smashed his index finger against the screen and scrolled down to his brother's name, Brian. Pressing the phone to his ear, he glanced around, double-checking no one was watching him. Lowering his head, he strolled away from the club.

"Oh, you so have to be kidding." His brother's voice filled his head.

A distant male voice floated through the cell phone.

Darien frowned. "You got someone with you?"

"Shit, get rid of him. You can fuck him later. I'm at… I was at the Dragon. Shit went down. I gotta get out of here." He fought to keep his voice controlled, for fear of drawing attention to himself.

"On Sukhumvit. I think I'm heading east. I can see the sign for the Purple Peacock up the road a ways."

"Okay. Stay in the Peacock's parking lot. I'll be there in–crap, it'll take me a good twenty or twenty-five minutes to get there." The call ended.

Darien gulped. Twenty minutes. Where could he hide in a parking lot? The way his night was going, if he hid under a car, it would drive over him. He chuckled. Could always try standing in the middle of the lot with my hands over my eyes, playing ostrich.

"Hey, baby. Wanna have a good–" The bleached blonde streetwalker stumbled back, raising her hand to cover her nose.

Great. Rejected by a hooker. This was supposed to be the start of my vacation. Not the end of my life. 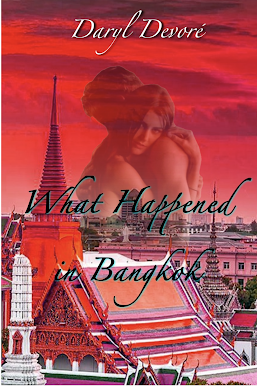 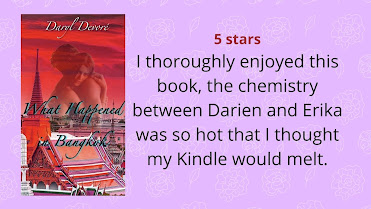