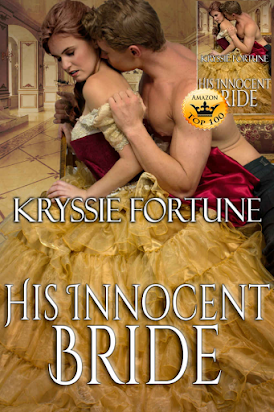 Going about her mundane life in a small fishing village, Alethea never dreamed she would end up with a man like the Earl of Deanswood, yet when she caught the handsome gentleman's eye he wasted no time in making her his wife. Unbeknownst to Alethea, however, her conniving mother has convinced Deanswood that she has no interest in the marital bed. Devastated by his seeming disinterest, Alethea searches for someone to instruct her in the ways of enticing a man.

When a friend informs Deanswood of Alethea's plans, he decides to train his new bride himself. Soon enough, Alethea finds herself naked, blindfolded, and helplessly bound as she is thoroughly spanked and then brought to one blushing, quivering climax after another. But when Alethea's life is threatened by her mother's vicious scheming, can Deanswood protect his innocent bride?

Publisher's Note: His Innocent Bride is a stand-alone novel which shares the Regency-era setting of Wickedly Used. It includes spankings and sexual scenes. If such material offends you, please don't buy this book. 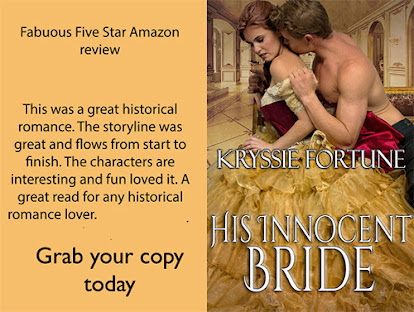 OR READ FOR FREE ON KINDLE UNLIMITED

The way he ran his hand up and down her spine made her thighs turn weak, but she’d promised to obey him. Unfair as that seemed, she would do as he asked. He’d already told her to strip, so rising to her feet, she let the blanket fall to the floor and untied the belt of her borrowed dressing gown. The silk slid from her shoulders and slithered down her arms. It pooled on the floor at her feet.

She covered her nipples with her right arm and used her left hand to shield her pussy.

He sucked in a breath. Voice stern, he commanded, “Arms at your sides. That’s it. God, woman, you’re temptation personified. I’ve pictured you naked since I brought you off that first time, but I never imagined you as beautiful as this. Turn around, let me see every inch of you.”

All her life, her mother had insisted vanity was a sin. When her husband called her beautiful, Alethea’s smile shone brighter than the summer sun. As she pirouetted before him, her nipples hardened, and damp heat flooded her pussy. In a perfect world, she’d study his bare chest and delicious-tasting cock too, but she was too shy to ask.

Holding her gaze, he beckoned her closer. “Come here, chick. Because you’ve accepted that I’m in charge in our marriage, I’ll forgo the punishment spanking you deserve. Instead, I’ll spank you for our mutual pleasure. Put yourself in danger again, and I’ll blister your beautiful bottom with my belt. Do you understand?”

She nodded and took a nervous step toward him. How any spanking could be for pleasure was beyond her, but she’d trust her husband and obey his commands. Another two steps and she stood with her knees at right angles to his lap.

A nervous glance showed her his cock had grown to humongous proportions. When she’d worn her blindfold, she’d never seen his arousal. Now it fascinated and delighted her.

When he pulled her over his knee, his cock dug into her hip. Positioned like this, she felt like a naughty child. She tensed when he stroked her bare bottom.

Deanswood patted it gently. “Relax, or this will hurt more than it should.”

Those were easy words for him to say, but hung over his lap with her bottom in the air, she felt vulnerable and scared. Taking a deep breath, she untensed the muscles in her bottom.

He brought his hand down in a sharp smack that made her yelp. Heat exploded through her, warming her bottom. Another two blows followed in quick succession, one on each cheek. The way he spread the pain made her wail. Tears misted her eyes, but she clasped his ankles and tried to stay still. Another slap, harder than before, made her sob in earnest. Her bottom blazed. Pain crescendoed through her like thunderbolts that jarred her bones.

Her mind fogged and her vision blurred. She forgot the terrors of her day. Forgot where she was. She couldn’t even remember her name. Her world narrowed until only she and Deanswood existed. His next two strikes made her howl.

1        Give us an insight into your main character. What does he/she do that is so special?

My heroine, Lady Alethea grew up in a remote fishing village on the Kent coast. A strict religious sect holds sway there. They disapprove of everything - singing, dancing, laughing. Even smiling is a sin. Alethea dreams of a happy future not one sent peddling fish. When James, Earl of Deanswood drives his yellow phaeton into the village, he reminds of the Greek God Apollo driving his flaming chariot across the sky. Not that she can admit to knowing Greek Myths in her village. She gives her heart in an instant, but although Deanswood marries her within a week, he doesn’t do the same.

James, Earl of Deanswood never expected to inherit the title. His father and older brother died the same day the battle of Waterloo started. Deanswood enlisted as a boy soldier and although he attained the rank of major, he sold out when he learned of his father’s death. Although it’s never officially stated in the book, he suffers from PTSD.

I write romance. Any sort. Paranormal or contemporary. His Innocent Bride is my second Regency Romance.

4. What draws you to this genre?

I write the books I like to read. There’s always a strong plot, with lots of adventure. Then there’s the sex. My pet hate is cliff hangers. Even the books in my series can be read as stand-alone romances. Add in that I’m a sucker for a happy-ever-after, and you’ve got my writing style.

5. What is your favorite motivational phrase.

It’s one of Mohamed Ali’s catchphrases. “If my head can conceive it and my heart can believe it, then I can achieve it.”

6         Tell us about your writing process and the way you brainstorm story ideas.

Brainstorm? It’s more like batter them to death with a hammer. I start with a random scene in my head and work out how people got there. Sometimes that one scene doesn’t even make it into the story. Once I’ve got the first draft finished, I edit, and edit, and edit. The first readthrough is to check the plot works. The next three are to polish the words. After that, I print it out and read it again. Words look different on paper. Next, I read it out loud. Then, and only then, do Iet my husband read it. Not that he’s a romance fan, but I’m dyslexic. He sees things I don’t.

After all that, my editor still makes changes.

Kryssie reads everything and anything, from literary fiction to sizzling romance. Her earliest memory is going to the library with her mother. She can’t have been more than two at the time. Reading, especially when a book’s hot and explicit, is more than a guilty pleasure. It’s an obsession.

Kryssie loves to visit historic sites, from Hadrian’s wall to Regency Bath. The first book she fell in love with was Georgette Heyer’s The Unknown Ajax. After that, she devoured every regency book she could. Part of Kryssie’s psyche lives in in in Regency London. She longs to dance quadrilles and flirt behind fans. Of course, Kryssie’s heroines do far more than flirt.