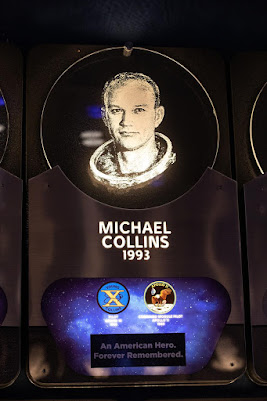 The Astronaut Hall of Fame display for astronaut Michael Collins is shown following a wreath-laying ceremony honoring his memory on April 30, 2021, at NASA’s Kennedy Space Center in Florida. Collins served as pilot on the three-day Gemini X mission in 1966, and he was the command module pilot for the historic Apollo 11 mission in 1969, where he remained in lunar orbit while Neil Armstrong and Buzz Aldrin become the first people to walk on the Moon. Collins passed away on April 28, 2021, at the age of 90.