Soon to be released - Capturing His Heart. A warm excerpt for your reading pleasure #hot #medieval #romance 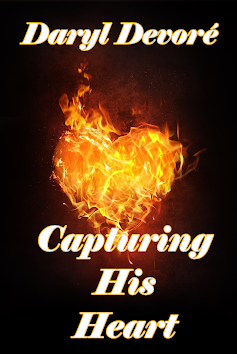 In March, the duet - 2 books in one bundle - Capturing His Heart will be released.
Last week I posted a hot snippet from book 1 in the duet - Dark Chocolate and Strawberries. And, I promised a snippet from book 2 - Branwyns Love. Well, I don't like to go back on my promises.
Scene set - The word Duna - means one who has been trained. A Dune - is a person to be instructed (trained). Tragor - means duty. Gon - means king. Gon-dra - means heir to the throne.
Everyone is in the great hall of the castle. Dinner is done.

A tall, dark-haired woman walked to the centre of the hall.

“That is Duna Reelan,” Clovis whispered to Branwyn.

“There is another Duna?”

A petite, black-haired woman rose from a table behind Branwyn’s. With small steps, she crossed the room, knelt before Dune Reelan then bowed her head. A servant brought a blindfold, secured it around Elaya’s head, and removed the dune’s clothing. Branwyn dropped her eyes and controlled the fear that boiled inside her.

“What do you desire?” Duna Reelan asked.

“What my master wants me to desire,” Elaya replied.

“What does your master desire for you?”

Duna Reelan looked toward the gon, who motioned to his son. A hush fell upon everyone as all eyes watched Malacke rise and walk to the kneeling, naked dune. He knelt one knee then slipped a hand between her legs. Branwyn did not understand what he did, but the effect it had on the dune, was obvious. She moaned and jerked her hips as he moved his hand.

“You may not surrender.” The tone of Malacke’s voice caused a shiver along Branwyn’s spine.

Her moans built to cries as she collapsed forward, weight resting on her hands and knees. Malacke adjusted his position and continued.

“No.” Malacke did not change the pace of his movements.

Branwyn raised her hand and rested it above the swell of her breasts. She was breathing almost as hard as the dune.

No one around her spoke.

“Please, may I surrender?” Elaya begged.

The dune’s arms buckled, and she collapsed. Malacke’s barehanded blow to her ass echoed throughout the hall. Her body trembling, she struggled to push herself back onto her hands and knees.

Branwyn sat erect on the edge of her chair. She wiped a trickle of sweat from her forehead.

Her cries mixed with sobs and screams as she fought to remain upright.

The scream signalling the dune’s release startled Branwyn. She yelled and fell back on to her chair. She closed her eyes and tried to calm her breath.

Malacke stood and returned to his seat. He picked up his wine goblet and gulped the contents.

Duna Reelan smiled at her submissive student, who knelt next to her. “Dune Elaya leaves us tonight. In two days’ time, she shall become a duna as she begins to serve her master. Pleasure him well. Tragor.” Reelan removed the girl’s blindfold and indicated permission to leave.

Duna Trea walked to the centre of the room, curtsied to the Gon, and announced, “Gon, we have a new dune.” She turned, found Branwyn, and pointed the spot next to her.

Branwyn rose as if by magic. She was too scared to move, but she found herself moving toward Trea then kneeling next to her.

Blurb - Caution - One smouldering twisted fairy tale mixed with one hot medieval romance might burn more than your fingers.

Daryl Devoré has bundled two of her hot romances into a duet. A hot twisted fairy and a hotter medieval romance combined in Capturing His Heart.

On board, she meets Andrew Woodsman and Willem Olf. One a cutie with the biggest puppy eyes and the other - dark and sophisticated. Even with her grandmother's words ringing in Red's ears - "Never trust a wolf in sheep's clothing" - Red has trouble choosing which man is the big bad wolf and which is her happily ever after.