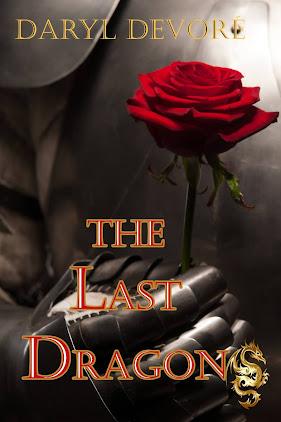 When I released The Last Dragon, I took a big breath and submitted it to a few review groups and Julie from The Reading Cafe responded with an amazing review.

So basically a wizard merges with a dragon, but the power of them combined was too much, and so the legend of the three dragons was born, each dragon contained a personality/trait, one lost in time and myth, one was a source of goodness and light, but not Ayrradex, this dragon craved chaos, destruction and death! Many tried to slay it, many died trying. The beast becoming more and more powerful!

Hawkyns is a prince of a dying principality, men, women and children slaughtered by the dragon rampaging the countryside. His own beloved wife and unborn son casualties, his mother mad, his father gravelly ill and his brothers missing after going out to hunt the murderous dragon! Enough is enough, he promises his father to kill the dragon or die trying, and he almost dies after defeating a spawn of the dragon he’s hunting!

Derry is a healer with extraordinary powers, living a lonely life, an old woman to keep her company. The only other visitor is a horrid man wanting to “rut” with her!! There has to be more to this life than caring her the elderly woman and evading the unwanted advances of a lecherous man!

Meeting Hawkyns opens Derry’s eyes to the outside world. But before they get a chance to talk, he’s whisked away by the villagers to be taken care of!

Pariset is a young boy who lives in the village. He’s seen how the village has changed! Children go missing (presumably to be fed to the dragon as an offering) he’s seen how the darkness has spread! And with his mother about to give birth, he’s scared for his sibling, can anyone help him?

So can Hawkyns keep his promise to his father? Can he find and slay the dragon? And can he remain true to the memory of his dead wife and child, when feelings begins to grow for the lovely maiden he’s recently met? They travel to meet and defeat the dragon together, without giving the story away both are vital to one another’s survival and to defeat the dragon. Pariset joins them on their quest.

This has the potential to be a film, I was drawn into the pages, and time just ceased to exist! Beautifully written, thought out well, and executed brilliantly. The characters were so different from what I’ve read. Hawkyns feeling he’d let his father and family down. Derry wanting more from her life.

There is a twist to the story that i totally didn’t see coming. In fact there was two….It’s a slow burning love story, which is nice to read once in a while. The action is fast paced and well written. The fury and anger that both Hawkyns and Derry feel is well explained. How could a village turn on Derry? And how can they think of even offering up the new born babe to the dragon? I liked when Hawkyns explains to Pariset that he would be honoured to be his friend and King in the future.

So does Hawkyns defeat the dragon? How is Derry pivotal to the plot? And can they honestly be together when Fate may have different plans for them? Love may not conquer all!!!

I’m hoping for more stories in this land. I’m hoping to see more of Pariset, Derry and Hawkyns.

Do I recommend this book? Hell yes I do. Knights, dragons, fair maidens and magic. What’s not to like and recommend. It’s George and the dragon meets Disney and a whole lot more!

Blurb - she pretty much summarized the book - so you don't need the blurb :-)