Do any of us know what goes on behind other people’s front doors? Elizabeth Woolley's Life Behind Closed Doors #fiction #general 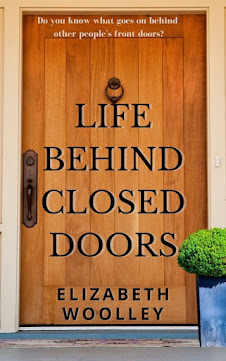 Do we really know what happens behind other people’s front doors? After an unpleasant event in her parish in Liverpool, Grace Bennett takes a job in the quiet Oxfordshire town of Swinbury as the vicar of the local church. The Bishop thinks it will be the ideal place for her to recover her confidence and forget what happened in her earlier post. Little did they know the dramas she would encounter.

One by one, the characters who make up some of the townspeople are revealed to us. Some are native born; others arrive to be with friends and family in the town. We meet a retired British journalist—a former foreign correspondent, who grew up in the town and had a difficult childhood there—and her lover, an American man who was once a member of the US Special Forces, and subsequently became a war photographer; a teenage couple, still at school, who meet tragedy at an early stage in their lives; a female murderer, now released from jail; a local builder who falls in love with her; a US former soldier who comes seeking revenge against the man he thought had abandoned him behind enemy lines; his daughter, a New York student, who loves him, no matter what; a woman who turned to drink after her daughter was killed; and a young woman whose life is transformed by a heart transplant. These characters, and a few minor ones, exist in isolation, until they are gradually drawn together as events unfold.

This is a slow intermingling of people whose lives are more unusual than you might think. They contain love, loss, happiness and tragedy. But then, knock on the doors of houses near you. You may uncover just as many fascinating stories behind closed doors. Their stories will warm your heart.

Some people’s lives are stranger than fiction.

The extraordinary stories of ordinary people.

A heart-warming story of a small, Oxfordshire town and its varied residents. You would be surprised to learn what goes on behind closed doors. Or would you? 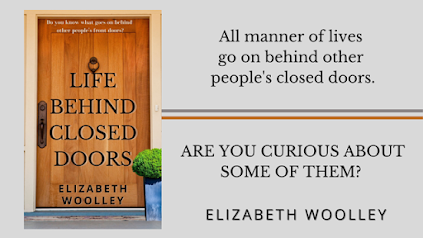 As her mother screeched at her from the other room, Dorinda gritted her teeth and supressed the urge to scream back at her. Dolores Lake had been irritable and cantankerous all her life, it seemed, but the dementia had now made her worse. She and her mother had lived together for the past eight years, since it became clear that she could no longer take care of herself because of the illness that was eating away at her brain. Dorinda had hardly known a day’s peace since.

As a child, Dorinda had taken refuge in books, despite her hobby being disparaged by her mother.

“Books are a waste of time, my girl. They just give people fancy ideas. Why don’t you do something useful like knitting or sewing? At least you will have something to wear at the end.”

Dorinda stubbornly refused to allow her mother to spoil the enjoyment she took in the books she had once borrowed from the library, but more recently, bought for herself. She became completely engrossed in the stories, of love and romance, of adventure, of thrills and spills—she read widely and voraciously. They were her escape from her mother.

People wondered why she put up with her mother’s treatment, but she thought she had probably become somewhat immune to the sound of Dolores’ voice; which had changed little since she was a child. Her father, when he was alive, took refuge on his allotment, at the other side of the main road, where he spent every hour when he wasn’t working as a postal worker, growing fruit and vegetables for the family. He, too, seemed deaf to the screeching sound of his ever-critical wife.

“These carrots you’ve brought me, they’re strange shapes and have worm holes in them. Can’t you grow nice straight ones like they have in the shops.”

He could have responded that carrots didn’t grow well in his heavy clay soil, and that he didn’t use any chemicals to repel pests—but he remained silent. Dolores had her say, and he continued to read the newspaper throughout her tirade. He had his escape, however, on the day, ten years earlier, when he was found dead on the allotment, by a neighbouring gardener. His heart had stopped beating. Since then, Dorinda had to face the onslaughts from her mother alone, and was slightly annoyed that her father had left her in this situation.

Grant awoke with a start. It had been the dream again; the one featuring his lucky escape many years earlier, when he had been part of an American Special Forces unit, conducting clandestine reconnaissance in Yemen—a godforsaken, impoverished country, few back then had even heard of. He had been known as Mac at that time, and not by his real name of Grant Le Fevre. His surname was courtesy of his father, a French national, whom his American mother had married shortly before Grant’s birth. Unfortunately, the marriage hadn’t lasted, and Grant’s mother took her son back to the US, to bring him up as an American. He often wondered what had happened to his father, who lost touch with them quite quickly after the divorce. His mother told him he had been in the French Foreign Legion, and Grant sometimes wondered if that was the reason behind his desire to join the armed forces. He had served eight years in the army, before applying to transfer to special forces. Yes, it had sometimes been exciting, often dangerous, but after his time in Yemen, he had decided that the life was no longer for him.

Returning to civilian life, in his mid-thirties, he swapped his gun for a camera, and continued to roam the world as a freelance war photographer, supplying iconic pictures to some of the world’s media, and winning two awards on the way. As he lay in a foxhole in Afghanistan, alongside a unit of British Royal Marines, he wondered what he was doing, still putting his life on the line, and trying to interest a largely disinterested world in what was happening beyond their shores.

As he listened to the British accents around him, he thought back to a woman he had met while briefly living in London; Jennifer Blake, a journalist with The Times. Like him, she travelled the world, and it was hard to make a relationship work under those circumstances. He had been very struck with her, he remembered. He loved her British sense of humour and her intelligence—not a bad-looker either, he recalled. She had joked with him.

“One day, when we’ve both got the travel bug out of our system, and we end up in the same country, we must carry on this conversation.”

That was said in a Paris hotel room, where they had stayed for a dirty weekend. Neither of them was in a committed relationship; he separated, she never married; and he wondered if she had meant it. Perhaps, when he returned from this trip, he would look her up. It had been several years since they had last met, and neither had been good at keeping in touch. He hoped nothing bad had happened to her. He was sure he would have heard on the grapevine if it had.