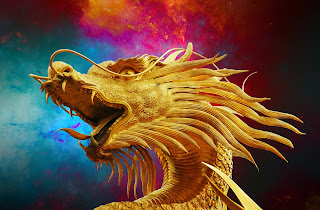 The monster twisted its head, sniffing the air then paused, tilted its snout and inhaled once more. Heaving its great body around, the dragon plodded away from the flames and towards its half-eaten meal.

The evening dew settled on the meadow grass and the chill seeped through Hawkyns' clothing. He was not dressed for battle, nor did he have his shield or helmet. Just his sword. Pushing to his knees, he turned. The reflection of the fire glowed off the blade. He glanced at the dragon, reached for his weapon then stood. His body swayed, but he shook himself, clearing his head. Running to where he expected his horse had fled, he emitted a short sharp whistle.

The dragon lifted his face from the cow. Chunks of bloodied meat dangled from his mouth. His jaws flexed as he ground his teeth into the flesh. Bones crunched under the force. Tossing his head back, he gulped his food then bent his head to his meal.

Hawkyns whistled again. Gladur stepped out of the brush and walked to his owner.

The charger stood still as Hawkyns placed a foot in the stirrup and grabbed a handful of mane to hoist himself onto the animal. “Ye know what to do.” He clicked Gladur onwards.

Across the meadow, he directed the horse towards the left hind flank of the eating dragon. When near it, he stopped. Both horse and rider remained motionless and alert. If the dragon turned, Hawkyns would spur Gladur charge to the cover of the forest.

The dragon swallowed the last gulp of cow and sniffed the ground. It raised his head and wrinkled its nose. Stretching out its wings, the beast curled them around itself, like a blanket and rested his head on the blood-stained grass. Hawkyns waited. Gladur twitched an ear towards a sound. At last, the breaths of the dragon slowed to a rhythmic pace. Its tail twitched and wrapped against its body.