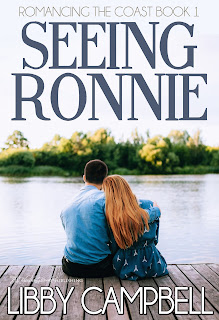 Background:
With book 3 in the Romancing the Coast, Trusting Ingrid, scheduled for release in June, what better time to look at books 1 and 2 in the series?
Watch Libby Campbell’s website or follow her on Amazon to be the first to learn of deals and discounts on books 1 and 2, closer to the release date of Trusting Ingrid.
Why did I choose to write about these three women?
After reading Winning Sadie, reviewer AGS said, “[I] would love to find out more about some of the supporting characters,” I thought, “I would too.”
The only way I knew to find out more about them was to write their stories. Because Ronnie was one of the feistiest, I started with her.
After that I moved on naturally to Cynthia. What I discovered at the base of her unhappiness was an eye-opener.
Last in the series, Ingrid was one of the hardest characters to write. To the world, she is a nasty, self-centred troublemaker. To the man who challenges her, she is a frightened creature whose bark is worse than her bite.
Trusting Ingrid is also the longest book in the series, finishing at just under 82,000 words. It’s quite a journey!

But now let’s get back to the start of the series: Seeing Ronnie. 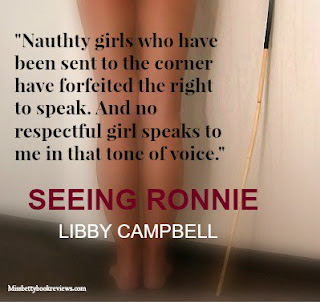 Blurb:
As a social blogger, Ronnie Flynn—aloof, beautiful, cool as a cucumber—is desperate to get to the society event of the year: Simon and Sadie’s engagement party on Seguro Island. No surprise that her name isn’t on the guest list, but as always, Ronnie has a backup plan. A plan that involves the handsome Del Franklin.
Del agrees to a swap: Ronnie gives him the scoop on his estranged wife’s dirty secrets and he takes her as his date to his boss’s party. The handsome, buff man of Italian descent makes only one condition: Ronnie better be good. No snooping. No manipulating. No digging for dirt. Or else.
With crossed fingers, and in spite of Del’s threat of putting her over his knee for disobeying, Ronnie ‘promises’ to be a good girl. Right. She’s not worried about Del. Her code of Keeping a Healthy Distance will protect her heart, and her backside. She’s too wily to get caught, anyway.
Ronnie sees. Literally. She can channel people’s feelings and see into their hearts. All her life, she has been hiding this secret weapon—her psychic ability—because what she sees is often too hard to understand and impossible to share. If she can handle that secret, surely she can handle Del. Or can she? He’s not like anyone else. Nothing has prepared her for him. She shouldn’t react like this to his dominance. She’s an independent, wealthy woman in her own right. No man will tell her what to do. Yet, there is something about this sexy dominant Latin lover that makes her pulse race.
Will Ronnie allow Del to break her Code of Keeping a Healthy Distance? Will seeing Ronnie open Del’s eyes to a new world? Will the two of them ever see life the same way?
Publishers’ note: Seeing Ronnie is intended for adults only. Spanking and other sexual activities represented in this book are fantasies only, intended for adults. Nothing in this book should be interpreted as Blushing Books’ or the author’s advocating any non-consensual spanking activity or spanking of minors. 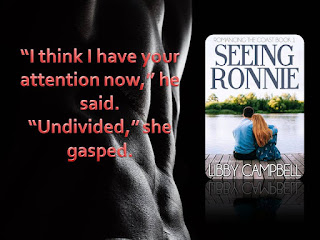 Del tilted her face up to his. “Don’t you ever speak to me like that again,” he said. His honey brown eyes sparked with reproach and something more, raw desire. His fingers burned on her skin and the heat of his stare made her itch in places that no man had scratched for a very long time. Part of her wanted to reach out and pull him close, to feel his powerful body wrapped around hers.
She was losing her mind. The island had made her take leave of all her senses.
Embarrassment quickly replaced her light-headed lust. While it was perfectly natural to have perved on the man, it was sloppy and amateurish to have been caught. With a strength she didn’t know she possessed, she wrenched her wrist free and pushed him away as hard as she could. He took two steps backwards to regain his balance and a grim smile spread over his face.
She put her hands on her hips and glared at him. “Or you’ll do what? Refuse to take me to the party tonight?” She spat the words and tried to skirt around him on the narrow path.
“I warned you the other day about the consequences of bad manners.” He caught her around the waist with his left hand and held her facing away from him. Then he raised his right hand high and brought it down on the top of her bare thighs with a loud crack that was more noise than impact.
“That’s what your rudeness gets you,” he said. “That and a lot more. But next time it will be on your bare bottom with you turned over my knee, as promised. I expect you to speak to me at least as respectfully as you would any business associate. Remember, I have experience with naughty girls. I’m the father of a fourteen-year-old, but you, unlike my spirited daughter, will be spanked for rudeness or sass. You’re a grown up and able to walk away from me if you want to, something she can’t do. Different rules for different girls. Only the big girls get spanked. So, if you and I are going to spend time together, and I hope this weekend is just the start of things, I expect you to show me good manners and thoughtful behavior.”
Ronnie looked at him, her mouth opening and closing. She knew she resembled a guppy and was just as wordless. This man had second sight of his own, straight into her soul. She wanted him and he knew it. Now he was saying he wanted her too. Was that an opportunity or a risk? Thoughts of what he was offering raced through her brain.
***

Libby writes romance stories with a spicy power exchange. Her strong women challenge the dominant men who love them.
Libby has lived all over Canada, but the best decision of her life was when she moved to Australia to marry her leading man. After many years there, Libby and her husband moved back to the Pacific Northwest. They now live in a leafy neighborhood close to the sea.
Libby’s passions are reading and writing, fuelled by chocolate and tea. She also loves hiking and an occasional night of dancing.
Please join her in her world of fantasy and happily-ever-after.

Follow her on Pinterest to see the images that inspire her characters and the worlds they live in. 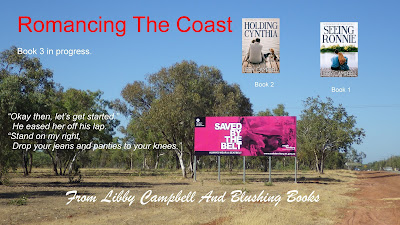 Don’t miss these other great titles from Libby Campbell and Blushing Books: