A masquerade ball in Malibu led to a single night of passion under the stars… and set the wheels of fate in motion.

Three years ago, waitress Kara Jablonski gave in to her wilder side with a fellow weretiger, the rock star billionaire Lars Jensen, a sun-kissed blond drummer with a viking's build. Six weeks later, the pregnancy test came back positive.

Knowing Lars' powerful, overbearing mother would be able to take the baby away, Kara did what she had to do.

Now chance has brought Lars back into her life, his touch making her pulse beat like the old legends. So strong, so loud, so bold.

Fate responds with a roar...

The Billionaire Shifter's Secret Baby is a novella that stars Lars Jensen, a member of a shifter family with viking blood featured in earlier books in the series, and is part of the Howls Romance series as well: http://howlsromance.com 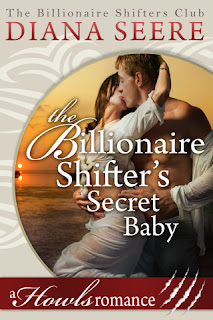 Diana Seere was raised by wolves in the forests outside Boston and San Francisco. The only time she spends in packs these days is at romance writing conventions. In truth, Diana is two New York Times and USA Today bestselling authors who decided to write shifter romance and have more fun.

Sign up for her New Releases and Sales email newsletter here: http://eepurl.com/beUZnr

Excerpt:
Lars Jensen ate up the ground beneath his feet, the shiny marble of the lobby gleaming. He strode with purpose, here for a meeting with Gavin Stanton and other shifters, convened for a very specific reason: the preservation of the shifter world.
His mind whirling with thoughts of finding the man who seemed hell-bent on destroying their species and way of life, he didn’t notice the headache that began in his chest, migrating up his neck to behind one eye, the pulsing a strangely pressured feeling. Not quite pain.
Certainly not pleasure.
It came with a sudden flush, one that curled his fists and tensed all his muscles at once. Thick thighs expanded with muscle as blood roared through him, his cock turned on like a light switch, his heart hammering in his chest.
He’d felt this way once before.
And only once.
She’s here, he thought. Eyes narrowing, his gaze darted around the enormous, high-ceilinged lobby, neck turning slowly, searching, scanning, pattern matching like a—
Like a tiger on the hunt for prey.
His nostrils widened, and he smelled her, the intoxicating scent going straight to the root of him, making him drunk and dizzy, vision blurring as he began to breathe heavily.
Control it, he told himself. Pausing before the elevator door, he saw a blur of greenery out of the corner of his eye.
Ding!
Called by technology and disoriented, he climbed into the mouth of the metal beast with a group of humans, all headed upstairs. As the doors closed, the abrupt withdrawal of her scent made it easy to restrain himself, composure returning as quickly as he’d lost it.
“Lars. Good to see you,” said a familiar voice, the silky strands of elegant femininity filling the air as he turned to catch the eye of Eva Nagy, the manager of the Platinum Club. She was so much more in the shifter world, but given the abundance of humans surrounding them, he couldn’t very well comment on that.
“And you as well, Eva,” he said. “Always a joy. How is business?”
“Our members are pleased. That is all that matters,” she said smoothly, her voice like warm caramel. Some of the human men in the elevator released a mating scent.
So did some of the women.
“You’re here for work?” she asked, making chitchat, knowing damn well why he was here.
“Mmm,” he said, noncommittal on purpose. A young woman, barely out of adolescence, made eyes at him, the flirting unmistakable. Under any other circumstance, he would take the bait, though by the looks of her—leggy blonde, overpainted with makeup, tongue rubbing against her lip suggestively—she was more like jailbait.
That was not the only reason why he gave her a polite nod and turned away.
“I know you,” said the blonde, triggering a running line of memory in Lars. Had he slept with her the last time he’d been in Boston?
“Hello,” he said, stalling for time.
“You’re Lars Jensen! From The Fates. The drummer.” She looked at his hands. “You have some of the finest moves in the music world.”
All eyes turned on him. The men were scornful and dismissive.
The women released more mating scents.
“Thank you,” he said, trying to ease out of the conversation.
Her gaze met his, wide and open, clearly interested in what his hands could do for her. “Are you here to play?” Wink.
“I am here on business,” he said coldly, anger gratefully replacing whatever feeling he’d encountered in the lobby. He reached into his pocket and pretended to answer a text. The blonde got the message, her face twisting into the nastiness of the rejected. He knew her type.
He despised her type.
The pounding of his heart slowed as each floor dinged, taking them farther away from the lobby. The mystery woman’s scent was gone within three deep breaths.
By the time the doors to the Platinum Club opened, he found it easy to convince himself he’d been mistaken. The mysterious woman he’d shared a night of passion with nearly three years ago, who had disappeared without a trace, was not here.
Pulse returning to normal, he walked slowly—achingly slowly—to the room where Gavin and his brother, Derry, were waiting for him.
Foolish hope had reignited in him, whimsy he could ill afford right now.
He had smelled a ghost. The stress of the shifter world’s problems had created mixed signals in his mind. She was not here.
His cock, on the other hand, refused to accept the truth.