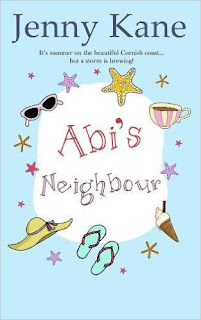 Set in the picturesque Sennen Cove, Cornwall, Abi’s Neighbour is the sequel to the bestselling Cornish romance, Abi’s House.

It’s time to catch up with Abi, Max, Beth, Jacob, Stan, and Sadie the Labrador- and meet some unexpected new faces...

Blurb
Abi Carter has finally found happiness. Living in her perfect tin miner’s cottage, she has good friends and a gorgeous boyfriend, Max. Life is good. But all that’s about to change when a new neighbour moves in next door.
Cassandra Henley-Pinkerton represents everything Abi thought she’d escaped when she left London. Obnoxious and stuck-up, Cassandra hates living in Cornwall. Worst of all, it looks like she has her sights set on Max.
But Cassandra has problems of her own. Not only is her wealthy married lawyer putting off joining her in their Cornish love nest, but now someone seems intent on sabotaging her business.
Will Cassandra mellow enough to turn to Abi for help – or are they destined never to get along?
Complete with sun, sea and a gorgeous Cornwall setting, Abi’s Neighbour is the PERFECT summer escape.
Abi’s Neighbour can be read as a standalone novel, or as a follow up to Abi’s House.
Available in eBook and print from Amazon (universal link): http://mybook.to/abisneighbour