An indie author with a lot of different hats, AJ Anders and Precursor - Book 1 - The Suoja Guild #romance 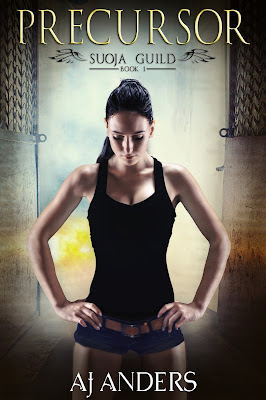 
About AJ Anders
An indie author with a lot of different hats, AJ Anders is an active mom, keeper of a full time job, and a passel of friends whose antics always keep her hopping. It's amazing she finds any time to craft her stories for her readers to enjoy. Fiercely loyal and protective of those she cares for, AJ enjoys creating stories where there may be strife and tears, but in the end it will be a well-earned happily ever after. Outside of writing AJ enjoys terrifying her friends with her driving skills and relaxing at home with a good book.

In the war against demons, Evie’s father stands against all things supernatural, including the Surmata, a race of beings that want to coexist with humans while they wage their own war against the demonic race. Raised in the Resistance, Evie struggles to stay true to herself and not fall under her father’s brainwashing.

With everyone around her a possible spy for her father, Evie’s sole relief from camp life comes from her best friend Maximilian. When he introduces her to his friends outside of the Resistance, Evie discovers a whole new world and possibly a place to belong.

But forces inside the camp are determined to keep Evie in her place, even if it means destroying who she is.

The back field had a series of obstacle courses set up that ranged from moderate to back-breaking difficulty. Evie found Max standing at the start of one the most punishing courses. He stood alone, observing a small platoon running the gauntlet. His arms folded over his chest, his face unreadable. Max, the adult, scared her when he was let out.
Evie much preferred the version he was with her. “Hey, Maxie.”
He rubbed his hand through his hair wearily. “You’re never letting that nickname go, are you?”
“Nope.” Evie popped the p for emphasis. “What are you doing?”
“Trying to stay awake by working their asses off.” Max pointed lazily at the soldiers on the field.
“Shouldn’t you be out there with them, then? Standing here watching can’t be that stimulating.”
“No. This tired, I’m not sure I can maintain my control. I could slip up.”
“Speaking of slipping up, something interesting just happened to me.”
“Yeah? What happened?” Max was only half listening. His gaze was laser focused on the men in the field.
“My father believes there’s a spy among us. He had me tested this morning.”
She had Max’s full attention now. “What? What the hell did he do?”
Evie waved off Max, knowing he was getting ready to go into full panic mode. He wasn’t worried about himself. It was what could’ve happened to her that scared him. “He just tested me with a simple message delivery. Had Dominick and his goons waiting on me. No biggie.”
“Fuck, Evie. That’s big. You could be in serious danger if he found out that you were colluding with the enemy.”
“But, I’m not. Colluding that is. We’re friends, but it’s not like I spy for you or for the Surmata.”
“Guilty by association, Sweets. Your father wouldn’t take kindly to knowing that you befriended a Surmata. Hell, I’m half demon. That’s even worse in his eyes.”
“He won’t find out. We just have to be more careful.”
His worried gaze met hers. “Fuck, Evie. I’m sorry. I should never have dragged you into this mess. If you didn’t know my secret, you would be safe.”
“Bull crap, Max. I’m safer knowing who my friends are. What they truly are. No matter what he threatens, my father wouldn’t let anything horrendous happen to me. He’s my flesh and blood.”
Max looked at her doubtfully, pity heavy in his eyes. “Evie—”
“No, Max,” she interrupted. “I don’t want to discuss it anymore. I’ll be fine.”
“You’re more fucking stubborn than a Cyclops.”
“A Cyclops? They’re real?”
“Yep. Only they’re about ten inches tall, not ten feet. Humans really fucked up that myth in the retelling.”
“Wow.”
“Shit! I almost forgot why I sent Johnny after you. Caleb and I are going into town, tonight. We invited a few of the Shadewolf Kaveri along. You’ve met most of them already. Wanna come?”
“I can’t be seen with you in Holden,” Evie murmured gloomily. She would’ve loved to see the guys again.
“Not Holden, Sweets. Another town. It will be safe for you, promise.”
Evie beamed. “Yes, I would love to come. Meet in the regular spot?”
“You betcha. As soon as you can sneak away, we’ll head out.”